It’s funny the way things happen. Usually I’m busy when my other half is not, or vice versa. But today we found ourselves at home with some free time. This usually means we get started on a project. Today we turned our attention to the garden for a few hours.

Our reuse-recycle theme is still going strong. After reading a little more about how to have a fuglevenlig (bird friendly) garden, I decided we needed a bird bath. We had a look in our local recycling area and found a large broken plate. Bingo – a bit of repair work and we will have a bird bath (fingers crossed!).

I have to say, I’m not the creative one in the relationship, or the handy person either! Last week Rasmus came up with the idea of making a hanging garden to increase the growing space in our garden. We replanted some parsley in the top and planted rocket and some edible flowers in the lower tiers. The baskets are carefully suspended from the top of a wall that divides our garden from our neighbours. Quiet an ingenious design, I think! If you look carefully on the brick wall you may be able to see the hemp string that makes up a spider web design. This is in preparation for some peas which we have planted along the bottom of the wall. Climbing plants are ideal in our small garden as they maximise ground space and grow up!

Hanging baskets have been done before, but hanging bike tyres, maybe not! We decided we would give it a go and planted some water cress (karse) as an experiment! 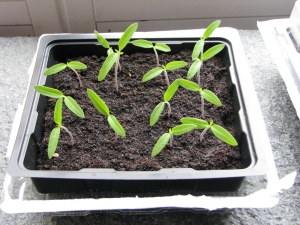 This is a project we started last week. We sowed some tomato, strawberry and sunflower seeds indoors in preparation for being planted outdoors. The tomatoes and sunflowers sprung up in no time at all, but nothing has happened with the strawberries as of yet. Today we planted the young sunflowers outside. Hopefully the shock of going from warm apartment to cooler garden won’t do them any harm. I’m hoping for some tall happy flowers this year!

Nature is on the side lines

Unfortunately at the moment my nature related thoughts have been pushed to the back of my mind and replaced with rugby ones! I’m putting all my energy (literally!) into promoting the newly formed women’s rugby club in Odense (the only one on Funen!). I’m hoping to round up enough interested women, teach them the basics and get playing! It’s no mean feat in a country where no one has really heard of this sport with an oval ball. I’ve spent the last week writing e-mails to newspapers, designing posters (in two languages!), biking to and from various schools, shops, university buildings trying to spread the word – WOMEN’S RUGBY IS HERE!

But despite this, it has been hard to ignore the wonderful bird song that fills my ear as I make these trips. Today was a beautiful sunny day with brilliant clear skies and it was the first day I have heard the newly arrived skylarks singing with all their heats. They sing in flight very high up on clear sunny days. They can usually be heard over open fields (ploughed especially) and high up on the heath/moor. What a wonderful sound to brighten your day! Listen here 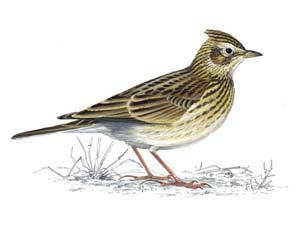 Skylark or Sanglærke in Danish (songlark) from RSPB site.

Today I took a short walk after breakfast to try and “get my ear in” to bird songs and calls again. Last year, with some help I managed to teach myself a few of the more common bird calls so I decided to head out and see what I could remember (leaving the camera at home!). On leaving the house I was greeted immediately by the amazingly loud call of a tiny wren (gærdesmutte). As one of Europe’s smallest birds I’m still astounded at the volume of sound they can make, with their characteristic thrill towards the end of each phrase (hear it here). I stood silently and waited for him to appear and was treated to a beautiful view of the minute but very assertive bird!

Next I heard the very common call of the great tit (musvit) which sounds to me like “teacher-teacher” or “see-saw, see-saw” often with more emphasis on the first syllable (hear it here). Great tits are exceptionally common here, more than any other bird that I’ve noticed. They regularly appear on “bird TV”, aka our bird feeder by the window! After a short while I heard the characteristic chattering of a pair of magpies (husskade). One was carrying nest building material (twigs) which is a sure sign of spring!

Soon after this my attention was caught by something slightly different. In the distance I could hear a faint knocking sound. As I got closer, it became clearer and above me, trying to make himself heard was a greater spotted woodpecker (stor flagspætte). He moved from tree to tree looking for branches (possibly dead ones) to drum on and make the best sound (which depends on drumming frequency, 10-40 strikes per second!). This spring drumming is a display to attract females attention. (Hear it here)

Finally I came across a bird singing which I didn’t recognize immediately. I walked along the edge of the beech/oak wood nearby and heard a watery somewhat unsure song. I stood and listened for a while trying to figure out what it was and where it was coming from. I spotted a few blackbirds high in the tree but from what I remembered it wasn’t a blackbird’s call and on closer inspection none of them were singing.

After some time a small bird flew from the trees around the corner and I followed him, sure it was the singer. After a few jumps I managed to get a look at him and it was, as I had suspected a little robin (rødhals)! (Hear it here) It’s the first time I’ve heard a robin sing here and it’s one of the songs that can take me a minute to figure out! It was a very nice start to the morning but it will be a whole different game when the migrants arrive in the next few months! When I come acorss a call/song I don’t recognise, I record it on my phone and compare it to others on the internet…it might help anyone who’s interested!

I’m tweeting away too…