The war started today. Up until now there have been some tolerated advancements, but today war was announced after a vicious assault on our resident guests. The morning started normally. I dragged myself out of bed and jumped in the shower, but while dressing I heard a strange noise outside in our garden. I peeped out through the curtains and one of the two neighboring cats (that I’ve meet) was sitting under our nest box. The neighboring cats have visited our garden before, and were greeted with some unfriendly noises and some flying missiles (usually chick peas!) and kindly left. This time it was different. 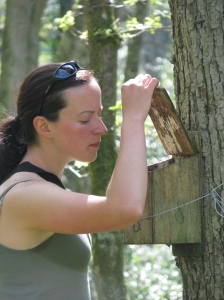 Monitoring next boxes on the Quantock Hills in England- thankfully I had some experience! Somerset, April 2011.

I threw on the rest of my clothes went out into the garden and the eager cat soon withdrew it’s forces and retreated. Yesterday I had taken a peep in the box and was absolutely delighted to see (and hear!) 4 tiny great tit chicks among the eggs in the box. When they are born they are blind, naked (a funny pink) extremely vulnerable and have HUGE mouths so the parents can easily feed them. New life had begun in our garden, and I was determined to try and protect it. 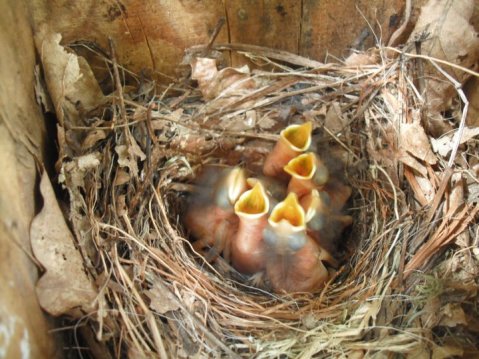 But this morning, when I opened the box it was completely different. When I looked in I couldn’t make sense of what I saw. It appeared that the nest was on it’s side and I couldn’t figure out where the birds, chicks or eggs were. I panicked! Distraught I called Rasmus from his bed and asked him to help me. At first he didn’t understand my ramblings, but when he looked in the box he understood. He was braver than me and described what he could see. The adult birds and chicks were at the bottom of the wooden box below the nest. 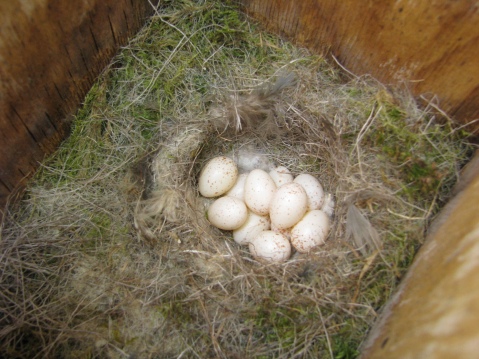 A tit nest on the Quantock Hills – the eggs are laid in the centre (cup) of the nest. Somerset, April 2011.

I was really in shock and didn’t know what to do. If we left the nest and baby birds in this way there is no doubt that they would die. The tightly woven nest keeps the chicks warm and in the right place. I considered phoning a friend to ask for his advice, but it was 7am on a Monday, I didn’t think he would appreciate it.

I made the decision, we had to fix this, we had to try and fix this. We worked together quickly and carefully to try and restore “normality”. Firstly we needed to remove (or flush out) the adults who were desperately trying to keep the chicks warm (temperatures had dropped below freezing last night). I carefully put my hand into the box and removed one of the birds and placed it in a small cotton bag. This is a technique used when ringing birds, to keep them safe while waiting to ring them. When we attempted to remove the second bird, it flew out to safety. 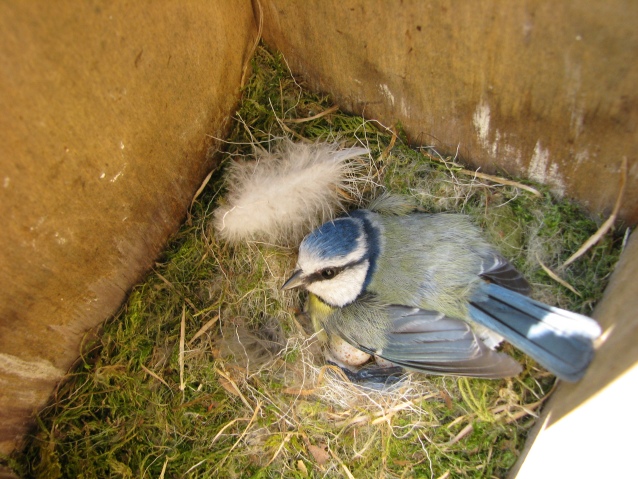 A female blue tit (blåmejse) sits on her eggs in the Quanocks, Somerset, April 2011.

With the adults out we carefully removed the nest and placed it in a safe place. It is very well constructed, almost solid and was easy to handle. Then we started with the tiny chicks. They were about 3cm long and I was afraid to pick them up using my hands so we got a tea spoon from the kitchen. We warmed it up and used it to carefully pick them up and put them into the cup of the nest. At the start I could only see two of the chicks moving but as I picked them up one by one they wiggled a little and I was relieved to know they were still alive.  There was one unhatched egg left, so it was placed in the cup of the nest also.

Once they were back in the nest we carefully positioned nest with chicks and egg back into the box. We repositioned the box and I placed the adult bird back into the box. It was all done very quickly and hopefully harmlessly. We breathed a small sigh of relief and crossed our fingers.

We aren’t exactly sure what happened. My guess is that the cat climbed up to the box and either got it’s paw into the hole or somehow opened the lid and attempted to take the adult or one of the chicks. I am a little shocked at how angry it has made me. I know that domestic cats kill millions of small birds every year, but I am going to do my best to prevent them taking the ones in my garden (I refrain from calling them mine, they are wild birds after all).

Thankfully after I returned from Danish class this morning all seemed to be back to normal.  I listened closely to the box and could hear the chicks little “peep peep” calls and watched the adult birds take it in turns to carry food into the nest. The crisis this morning (and our intervention) doesn’t seem to have disturbed them to much. They adults do seem very cautious about entering the nest, spending quite a bit of time moving around the garden before going inside. Maybe they are making sure it’s safe before going inside, where they are almost trapped in a way. 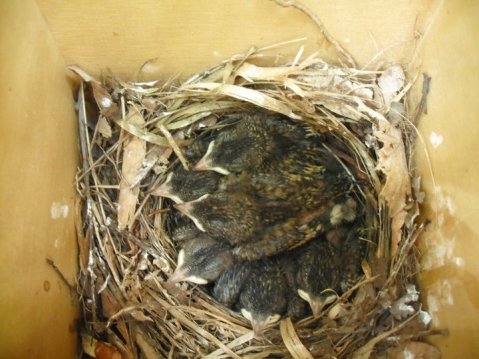 Things get very full in the nest as the chicks get older and grow feathers! Quantock Hills, Somerset, April 2011.

We have made a few alterations to the box and it’s surrounds, in the hope that it might be a little more “cat proof”. I have also purchased a weapon (water gun!) to assist in deterring the enemy from attacking again. 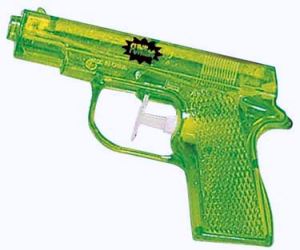 It’s been a very stressful morning but fingers crossed things will progress as they should over the next few weeks and the chicks will get to see the big bad world. I didn’t want to disturb the birds and more than necessary, so have no photos from today.

This evening I took a quick peak into our little nest box. Things are progressing very nicely with a total of 8 eggs in the beautifully coloured nest. Small passerines usually lay one egg per day, until finished (usually 10-12 for great tits). After the female has finished laying all the eggs she will incubate them. This takes approximately 10-15 days (if I remember correctly from last year!). This week we were a little concerned as we spotted a pair of blue tits entering the box on a few occasions. Unfortunately the surrounding woodland is mostly immature (around 30 years old at my guess) so there is limited cavities (holes) in old trees for small passerines to nest in. Thankfully the great tit pair were back very shortly to get rid of the unwanted guests and all seems to be going well in the nest! I will keep you posted! 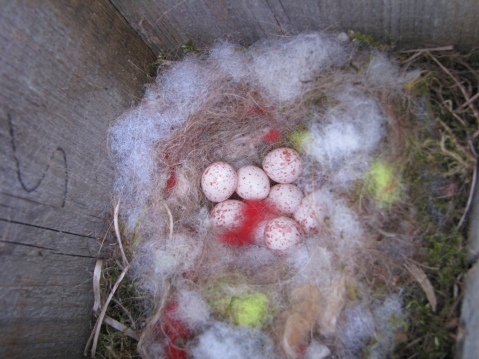 This morning after breakfast, while the garden was quiet we took the opportunity to have a little look in our home-made nest box (redekasse). For the past few days, when I’ve had a little look in the box in the evenings a bird (great tit – musvit) has been sitting tight. Usually when you approach a nest box, a bird in a box will come out or “be flushed” but this female didn’t budge. She simply looked up at me, and remained calm. This usually means they are sitting on eggs, but I thought it was a bit soon for this, as they were still building the nest. This morning I understood why! They have finished building their nest and are now laying eggs. The eggs are very small, about the size of the finger nail on your thumb. It’s very exciting! I wonder how many she will lay? How many will grow up to be chicks? How many will survive their first year? I will keep you posted! 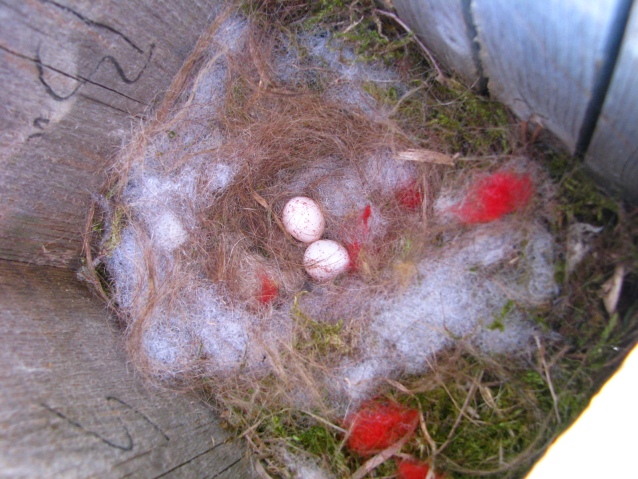 I’m tweeting away too…